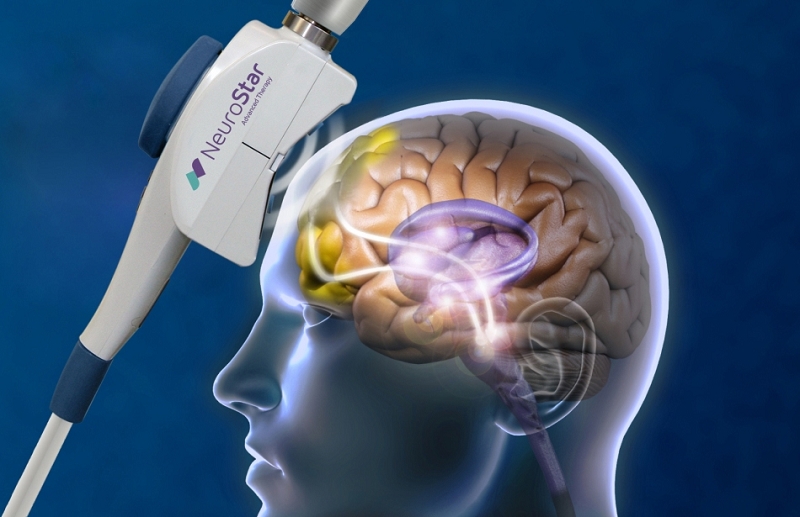 TMS is a unique platform for delivering energy to the brain and stimulating various specific anatomical locations.

TMS magnets can be placed over different brain regions, and pulse sequences can be designed to be either excitatory or inhibitory.  This allows for a vast potential of other conditions that could be treated, and research is being pursued on many fronts.
These are all considered to be off-label uses for TMS currently.

OCD
Status: FDA Approved
Obsessive Compulsive Disorder is known to live in a deeper part of the brain that is not treated with currently available TMS magnets. Research is being done on magnets specifically designed to reach the OCD regions of the brain, the Orbital Frontal Cortex and the Anterior Cingulate Cortex. Current technology allows us to reach a region of the brain that connects to these areas that has shown modest clinical benefit.

PTSD
Status: Clinical Trials
There are many studies that show efficacy of the use of TMS in Post-Traumatic Stress Disorder. VA medical centers have been one of the leaders of research in this area. TMS is known to reduce anxiety symptoms in patients with depression, and has efficacy in the anxiety symptoms of PTSD as well. We can also use special protocols to enhance the treatment of various anxiety symptoms.

Chronic Pain
Status: Clinical Trials
Chronic pain has aspects that are both physical and mental, and it comes in many forms. Sometimes when treating the body for pain have failed, a top down approach that attacks the brain’s perception of pain can be useful. Treating mood areas with TMS also seems to affect the pain threshold. In one study, a single TMS treatment was given post-operatively to patients while they were in the recovery room, and TMS treated patients used 50% less self-administered pain medicine than those given a sham treatment.

TMS targeted at pain pathways themselves in the motor and sensory cortex of the brain has been a very useful technique in treating Fibromyalgia, Chronic Regional Pain Syndrome (CRPS, also known as RSD) and other types of neuropathic pain.

Bipolar Disorder
Status: Clinical Trials
Use in clinical practice at SoCal TMS has shown positive results. Beyond Major Depression, Bipolar Disorder is an obvious target for TMS treatment. The same treatment protocols targeting the Dorsal Lateral Prefrontal Cortex in treating the depressed phase of Bipolar Disorder have had excellent clinical success with many patients. Insurance coverage is currently lacking however as the strict FDA indication for TMS is Major Depression. TMS can cause a switch into mania in Bipolar Disorder, just as with antidepressants.
hermes outlet